Skip to content
Previous Next
Idyllic Rautatienpuisto area in Riihimäki

When you get off the train at Riihimäki railway station and head to the other side of the station building, you arrive at a magnificent historic area with wooden houses. This is the pearl of Riihimäki, Rautatienpuisto (Railway Park). 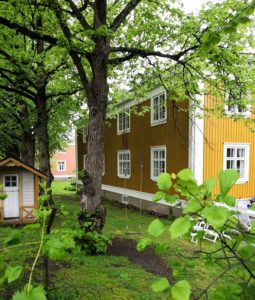 The Rautatienpuisto area was originally built as a residential area for railway workers, the oldest of the buildings being the master builder’s house from 1857. The buildings in the area were given protected status in 1993 due to their cultural and historical value.

A dramatic start to the former hotel

When you arrive from Riihimäki Station to the Rautatienpuisto area, you will first see the former hotel, which was originally built in 1878. However, the story goes that farm worker Verner and another man had sampled wine and cognac from the barrels they had carried to the attic. Not being particularly careful, they managed to ignite a fire. The fire destroyed the securities and important documents of the hotel owner Olivia Axeen. Wines and 130 litres of cognac were also destroyed. After the fire, a new hotel was built on the old stone foundations according to the old building drawings. Until 1943, the hotel operated under the names Axeens Hotel, Riihimäki-Hotel, Rautatienhotelli and Hotelli Turisti, among others. Today, Paloheimo Oy’s head office is located in the building.

The City Museum presents the history of Riihimäki

The Riihimäki City Museum is housed in one of the old buildings in the Rautatienpuisto area, the Railway Engineer’s House. Completed in 1858, the building has served as the station manager’s apartment, ticket office and VR’s office space. The City Museum has been in the building since 1970, researching and presenting the life of the people of Riihimäki from the Stone Age to the present day, and presenting the material cultural heritage of Riihimäki. In the past, animals have also been seen in the courtyard and in the outbuilding; track engineer Fagerholm had sheep and chickens, and before him the station manager was given a cow as a work benefit, for which his employer VR provided winter hay. During the war, food for German soldiers was stored in the outbuilding. 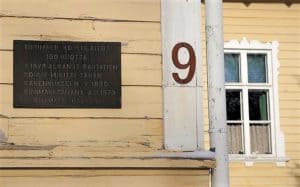 The Music Hall was completed in 1880 and served as a school for railway workers. Later, the building served as a hospital and then as the base of the Riihimäki Railway Orchestra, from which it was renamed the Music Hall. Today, the Music Hall is called the Ö-talo (Ö-house) and hosts music and cultural events. Ö-talo can also be rented for private events. In addition to the Ö-talo, cultural events are held at the old wooden Vihreä Talo (Green House), which is also next to the train station.

The second school building in the Rautatienpuisto area, the Art Nouveau style Lepohuone was built in 1908. It operated as an elementary school until 1930 and has also served as a temporary overnight accommodation for VR staff. Today, the building has a day care centre for the elderly.

Coffee breaks and parties at the Red House

At the edge of the Rautatienpuisto area you can explore one of the historic buildings. This is the Red House, the former living quarters for railway workers, built in 1881. In 1907, the apartments were converted into a daycare centre and meeting rooms. Nowadays, you can visit this lovely, old building for coffee and at the same time do some shopping in the adorable Café and interior design shop Pompoti. You can also rent space for parties and meetings from the Red House. What could be more wonderful than a party in a historic setting at the Rautatienpuisto!