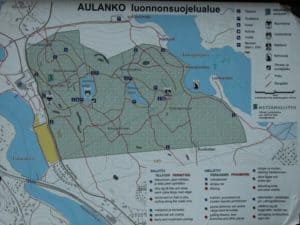 Hämeenlinna has for long had a reputation as a “city of parks”. Aulanko park forest was developed by Hugo Standertskjöld, who bought the Karlberg estate with money he had gained from the arms industry. Hugo transformed the Karlberg estate into a beautiful manor milieu with buildings and parks constructed in Central European style. The park forest of Aulanko became a protected nature reserve in 1930.

You are standing at the border of Aulanko Nature Reserve. Nature in this region is particularly valuable and it should be protected by everyone spending time in the area. You should not pick plants or insects in the nature reserve, or damage the soil or rocks.

Tip: People have various senses, which help us observe our surroundings. Which senses can you think of? Choose the most pleasant spot in the area. What are the interesting things you can see, hear, feel, smell, and perhaps even taste? 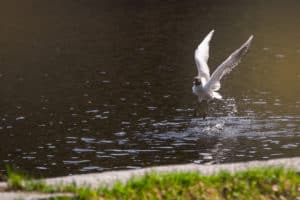 Originally, there were two mires on the Aulangonvuori Hill. Hugo Standertskjöld had two ponds dug on the spot, Lake Joutsenlampi (Swan Pond) and Lake Metsälampi (Forest Pond). A lot of soil was dug up, which was used for covering rocks and constructing artificial islands. Hugo also had a Gothic Ruusulaakso Pavilion (Rose Valley Pavilion) built on the shore. Hugo’s idea was that in Aulanko, the “visitors could stop by at the pavilions, look at nature and think happy thoughts”.

Tip: Find a suitable spot where you can see Lake Metsälampi. The landscape changes in different seasons. Which features are constant in the landscape and which change according to the seasons? What “beautiful thoughts” does the landscape create in you? 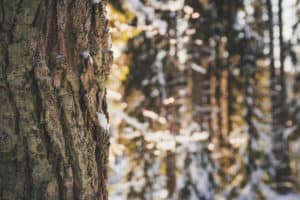 The vegetation in Aulanko is particularly diverse. Hugo Standertskjöld was interested in plants. Thanks to him, various plant species were brought to Aulanko from Finland and abroad, and the area developed into one of Finland’s most important examples of garden art.

Approximately 50 species or varieties of coniferous trees and approximately 150 species of deciduous trees and shrubs have been planted in the area. Not all of them have survived. The most severe storm in Aulanko was storm Janika on 15 November 2001. Some of the fallen trees were left on the ground to enhance the area’s biodiversity. The dominant tree is spruce (Picea), but there is also a wide range of deciduous trees. Silver birch (Betula pendula), European aspen (Populus tremula), Mountain-ash (Sorbus) and black alder (Alnus glutinosa) grow in the deciduous forest. All the hardwood species thriving in Finland grow also in Aulanko, as well as various foreign tree species.

Tip: Look at the trees around you. Choose your favourite tree. Reflect on what attracts you in that specific tree. Point out the tree to your friend and ask him/her to figure out why you selected it.

Tip: Look at the forest nature surrounding you. What animals and traces of animals can you see around you? You can also use magnifying equipment to find the microscopic world, such as a magnifying glass app. 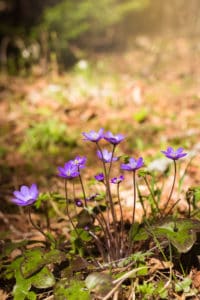 As the founder of Aulanko Hugo Standertskjöld grew older, he sold the Karlberg area to the city of Hämeenlinna for 7 million Finnish marks in 1926. The city sold the hotel and its parks to the Finnish Travellers’ Association (Matkailuyhdistys ry) in 1936, and an estate named Aulanko was formed from the rest of the area. The park forest’s ownership was transferred to the Finnish Forest Research Institute in 1963, and in 2002, to Metsähallitus.

In his will, Standertskjöld hoped that the Aulanko park forest would remain open for all, and the entrance would be free of charge. Hugo’s wish has come true. The same thought is expressed in Everyman’s rights, which grants everyone the opportunity to move freely in Finnish nature. In addition to Everyman’s rights, people have the responsibility to respect nature and avoid causing any damage while spending time in nature. This is how Aulanko and other forests will be preserved for the future generations.

Tip: It is important for a valuable area to be preserved also in the future. What could you do to protect nature in Aulanko or elsewhere? What kind of “nature promise” could you make?