The historical and cultural landscapes of Hämeen Härkätie (Ox Road of Häme) with their idyllic villages entice the visitors to stop frequently. The beautiful ridge landscape of Porras is breathtakingly beautiful, with a view over water on both sides of the route. The old factory history reminds the visitor of work in Forssa in the past. 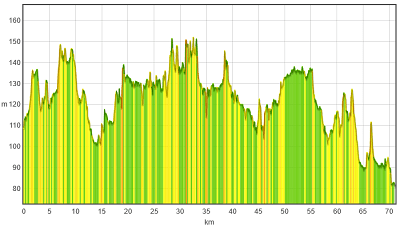 Hämeen Härkätie (Häme Ox Road) is one of the oldest roads in the country, and its early phases date back far beyond the medieval times, all the way back to the Viking era in the 9th century. Traders from Birka in Sweden acquired hunting and fishing products, and sold them to Central Europe. Trading places popped up along the Finnish coastline, where people from Birka and coastal Finns traded their goods.


As the hunting areas were small on the coast, coastal residents exchanged their products to desired forest products with inland residents from the Häme region. People from Häme acquired valuable fur from their vast forests, such as sable, ermine, pine marten and otter, and also castoreum, which was respected in the Mediterranean area already in the ancient times. Castoreum is an exudate acquired from beavers’ castor sacs, and used as medicine. It was believed to increase sexual performance and treat cardiovascular disease, epilepsy and toxic conditions. In return, traders from Häme received guns, jewellery, metal and salt.


A trading place was formed at the coastal end of Härkätie (Ox Road), and eventually the city of Turku grew around the Unikankare Hill. The inland trading place was located in the vicinity of the current city of Hämeenlinna, where Swedes built a stone castle at the end of the 13th century.


In the 10th century, the Härkätie (Ox Road) connecting the two trading locations was merely a windy path cleaned from vegetation. Rivers, brooks and damp places were crossed along duckboards or piles of stones. This ancient road was maintained by ancient villages.


The road alignment can be seen in the road list compiled by Jaakko Teitti in 1555–56 and the maps from 1600–1700. According to them, the Ox Road of Häme was a route of 162 km leading from Hämeenlinna to Renko Church and Lietsa, then to Somero via Porras in Tammela and Letku, and ending up by Turku Cathedral via Marttila and Lieto.


The majority of travel took place on foot, and the goods were transported on horses. During the summer, an ordinary day trip was 30 to 40 km, depending on the terrain and the load. In the winter, the Ox Road was replaced by a winter road signposted along the lakes and mires.


Oxen were not used for long distance transport along Härkätie (Ox Road), but they were used in ploughing. Häme was a well-known horse province. Oxen replaced horses as farm animals only as late as in the 17th century, when the government confiscated peasants’ horses for military purposes. To avoid this, villagers decided to keep oxen instead. Härkätie’s name, the Ox Road, may be based on a European tradition about the creation of old roads. According to it, a strong animal, such as an ox, would have been the first to tread along a path and open it.


At the beginning, people stayed over in temporary accommodation. When life became more settled and habitation expanded, inns were established along the road for people travelling for governmental purposes. The Ox Road inns were located at Renko Church, Porras of Tammela, Somero’s Lahti, Juutila in Marttila and Pinomäki in Lieto. Private owners set up taverns along the roadside, mostly offering sahti (Finnish home-brew) and beer at the end of the medieval times.


Despite many commercial and political upheavals, Southwestern Finland and Häme, connected by the Ox Road, formed a unified and clear traffic area until as late as the 19th century. Transition to machine power, railways at first and then cars, reduced the importance of the traditional route. The Ox Road alignment did not, however, change much over the centuries, until it was replaced by highway 10, which was opened for traffic in 1962, and which turned the Ox Road into quiet local and private roads.

The trail starts (approximately 70 km) from the village of Letku. There is a village shop in Letku, where you can buy snacks for the journey. The cycling route follows the Ox Road of Häme from beginning to end. At first, you will see the Häme Nature Centre, followed by the Eerikkilä Sports Institute soon thereafter. Both offer different services from food to accommodation, and are ideal for a short break. The trail continues for approximately ten kilometres in the beautiful ridge landscape of Porras, and through small villages such as the village of Porras.


In the Porras Tannery you can find out about the work of tanners in the past, enjoy the café services and perhaps even stay overnight. From Porras, the journey continues all the way to Renko in an idyllic rural landscape through beautiful Häme villages such as Räyskälä, Vojakkala, Nummenkylä and Lietsa. In Renko’s Kuittila, there is a summer café called Kynttilä (Candle). The journey from Renko to Hämeenlinna follows a quiet road, and the forests on both sides of the road and the occasional farms create a lovely setting. The Ox Road of Häme ends at the gates of Häme Castle.

The trail has been marked from beginning to end with the large brown signs of Ox Road of Häme. These signs can be found at all junctions, which makes the trail easy to follow. You should dress according to the weather, have a separate jacket for the breaks, as well as something to eat and drink because of the long distances. There are some services along the route, but outside the high season they are rarely available, or open only to order. The route is partly lit, but you should take a headlamp or a bicycle lamp if you plan to cycle in the dark. The route is only a small section of the Ox Road of Häme, and, if you so wish, it is easy to continue longer along the road, perhaps all the way to Turku. You can also start the route from Hämeenlinna. The journey is fairly long, and it is worth packing a tyre repair kit and a bicycle pump because of the long distances. Reflective clothing and reflectors are also recommended, especially after dusk falls. It is also worth noting that the Ox Road is relatively narrow in parts, and it does not have a separate pavement for pedestrians and cyclists. Some of the distances between Hämeenlinna and the village of Letku:


To the start of the trail

The trail starts from the village of Letku, which is located along Highway 2. The village of Letku is signposted from the highway along the Ox Road of Häme (road number 2824). You can also start the trail from the castle grounds in Hämeenlinna.


TRAIL MARKINGS: The trail is marked with the large brown signs of the Ox Road of Häme.


TRAIL SUITABILITY: The trail is suitable for more experienced cyclists. The trail consists of a tarmacked road and, in parts, a sand road. There is no separate pavement for pedestrians and cyclists.