Ida Aalberg (4 December 1857 – 17 January 1915) was the most notable and internationally known Finnish actress of her time. She was a member of the Theatre of Finland from 1874 to 1883 and later a regular visiting actress. She also performed on foreign scenes, in Scandinavia, Germany, Hungary and Russia among others. Ida Aalberg Museum is located in Janakkala, Leppäkoski between the railroad and Leppäkoski school. The former railway master's house, which serves as a museum building, is protected as a site of national importance. The house is a complete rarity among railway buildings. It was built during the first phase of Finland's oldest railwaytrack and was already inhabited in 1862 by then-track master Antti Ahlberg. He was the father of the future star, actor Ida Aalberg. The house was in the possession of the Ahlbergs until the early 20th century. The building has housed the Ida Aalberg Museum since 1976. Museum's exhibition aims to highlight the unique history of the museum building and the importance of the railways for both Ida Aalberg's career and the village of Leppäkoski. The exhibition honors the life and career of Ida Aalberg, both as an international artist and as a private person born in Janakkala. The museum is open in July and on request. 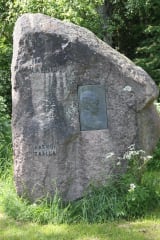