Hakkapeliitta (Finnish pl. hakkapeliitat) were Finnish light cavalryman who served in the Swedish army in the 17th century. At that time, Finland was part of Sweden. The king of Sweden needed soldiers from Österland (Eastland), or Finland, to the wars he was fighting in Europe. Finnish soldiers were given the name hakkapeliitta because their Finnish battle cry was “Hakkaa päälle!” (English: strike upon [them]; Swedish: hacka på), commonly translated as “Cut them down!” 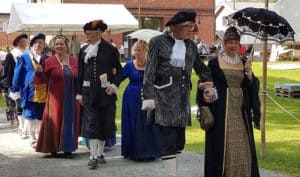 The service held in the church will be followed by conscription into the army by the church. The actors playing the role of Hakkapeliitta soldiers will carry out the conscription by grabbing innocent bystanders to the armed forces with them. In the 17th century, getting conscripted was an obligation some people could not escape. The army recruited either a horse or a man from each farmstead. A story tells about a father-in-law who wanted to keep his horse and get rid of his lazy son-in-law – therefore, he did not mind sending his son-in-law to the army.

After the conscription, the horses and riders, soldiers and king’s wagons will head for Mustiala, where the actual two-day Hakkapeliitta Market will be held. At Hakkapeliitta Market it is easy to get into the 17th-century atmosphere, since the market salesmen, artisans showing their skills, beggars and the rest of the folk are all dressed up in accordance with their social class. You will see tangle-haired beggars in their bare feet, and in the opposite direction, you can see courtiers or the royal couple in their glorious costumes. The event is definitely worth a visit even from further away! 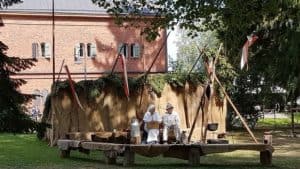 There are well over one hundred sales stalls, and no plastic in sight anywhere. The stalls are made of wood and all the props are designed in such a manner that they could have been in use already in the 17th century. The market stalls sell home-made food, pastries, handicrafts, art and tools. The public can also see old working methods being used. You can wonder at such activities as soap-boiling, iron forging, butter churning and rope making! The event also offers you an opportunity to admire dance shows and hear lectures. There is also own programme for children.

There’s food available for every taste, including pancakes and pea soup. You can also book yourself a seat in a variety of dinner tables serving 17th-century banquet foods. And one of the exciting things in the history of Hakkapeliitta is that, in the historical banquet table, you can eat with your fingers – just like they did in the olden days!