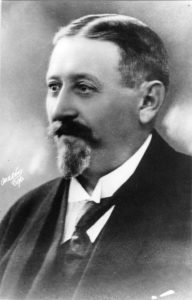 Hjalmar Gabriel Paloheimo (until 1906 Brander) was born in Kangasala in 1864. He bought the Santamäki Manor in Loppi in 1889. As a farmer, the new owner proved himself enlightened and unprejudiced. Later in his life he owned numerous estates that formed a significant property in land.

The first industrial endeavor of H.G. Paloheimo was a sawmill in Santamäki that was built in 1890. Nine years later, another sawmill was built in Kesijärvi. This was already a significant sawmill both from the perspective of industry and commerce. A few years later, the sawmill was relocated to Riihimäki.

In addition to producing timber, Paloheimo started brick manufacturing, and in 1910 a power plant was opened. Riihimäki became the centre of the Paloheimo industrial activities, and the main production branches became timber, bricks and electricity. Later in his life H.G. Paloheimo also participated in starting up the glass industry in Riihimäki.

H.G. Paloheimo was more than just an industrialist: he was also a learned theologian, an enthusiastic farmer and a senator. As a representative of the peasant class in the parliament, he focussed on solving the problems of tenant farmers and tenancy. He worked in the senate as a Minister of Supply in 1918.

In all his actions, Paloheimo was guided by national spirit and the fight for the status of the Finnish language. He wished to be able to transfer the effects of these ideas also onto the field of economy. Paloheimo left his mark in the history of the Finnish industry also outside Riihimäki. He co-founded big companies in various parts of the country and participated, among other things, in starting up the wood processing industry in Kajaani and in Rauma. He died in 1919 only at the age of 54.

Traces of the Paloheimo can still be seen in Riihimäki

Today, Paloheimo Oy‘s headquarter is located opposite Riihimäki railway station in a building formerly housed a hotel founded by Mrs. Axeen in 1879. The building is part of the magnificent Riihimäen Rautatienpuisto area. In the same area operates The Historical Museum of Riihimäki, where artifacts from Paloheimo can be seen. The portrait relief of H.G. Paloheimo was unveiled on 11 September 1961 in Station Square on the site where the company’s first factory, a sawmill, was established in 1904. In addition to the portrait, Wäinö Aaltonen’s artwork features symbolism from the company’s industries in wood, brick and electrical industries, as well as agriculture. 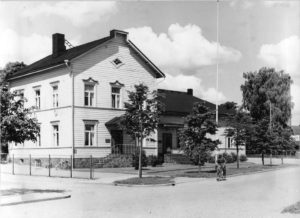 Today, Paloheimo Oy’s headquarter is located in Rautatienpuisto area on the premises of the former hotel. Photo: Riihimäen kaupunginmuseo 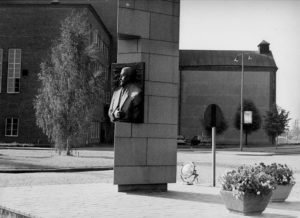 A statue of H. G. Paloheimo in Station Square, a sawmill established by Paloheimo in the background. Photo: Riihimäen kaupunginmuseo 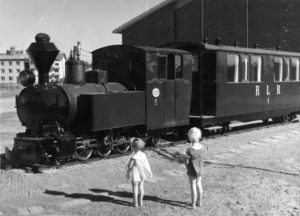 A monument to the Loppi Railway built by Paloheimo, is located at the end of Paloheimonkatu, on the former trackline. Photo: Riihimäen kaupunginmuseo