The history of Aulanko park forest 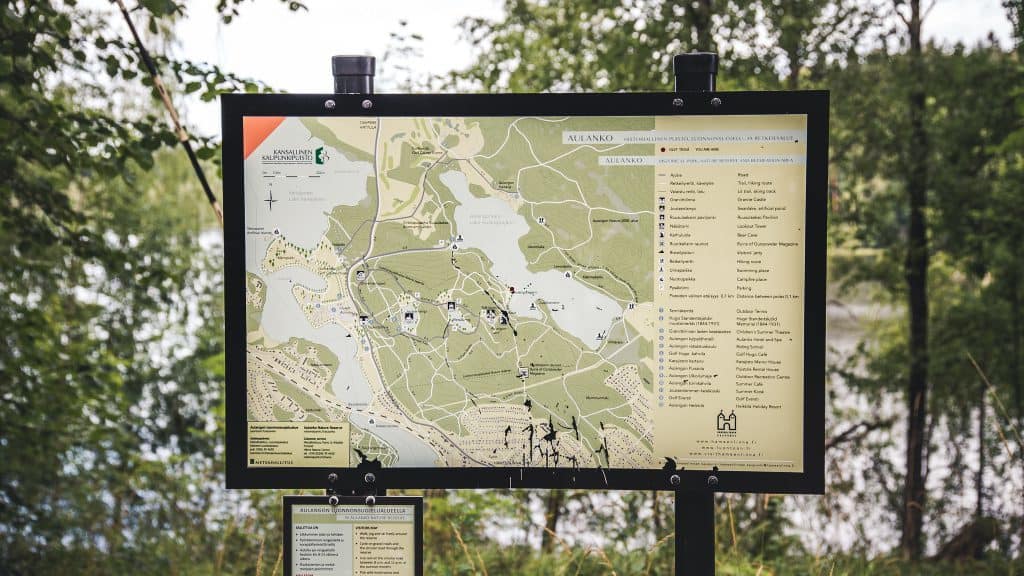 Colonel Hugo Standertskjöld bought the Karlberg estate by Lake Vanajavesi in 1883 (link in Finnish). Hugo hired 250 working men, and had an English-style park built on his estate in 1883–1910.


There were two big mires where the current nature reserve lies, and the colonel commissioned two big artificial lakes to be constructed in the location: Joutsenlampi (Swan Pond) and Metsälampi (Forest Pond). In addition, he commissioned the impressive ruins of a granite castle, 14 km of new road, scenic lookout terraces and pavilions.


Hugo kept Aulanko and the park forest open to all. As he aged, travelling became cumbersome. Hugo did not have any family, and he decided to pass the ownership of Aulanko to the city. The condition of trade was to keep the area open to all.


The park forest of Aulanko became a protected nature reserve in 1930 (link in Finnish). 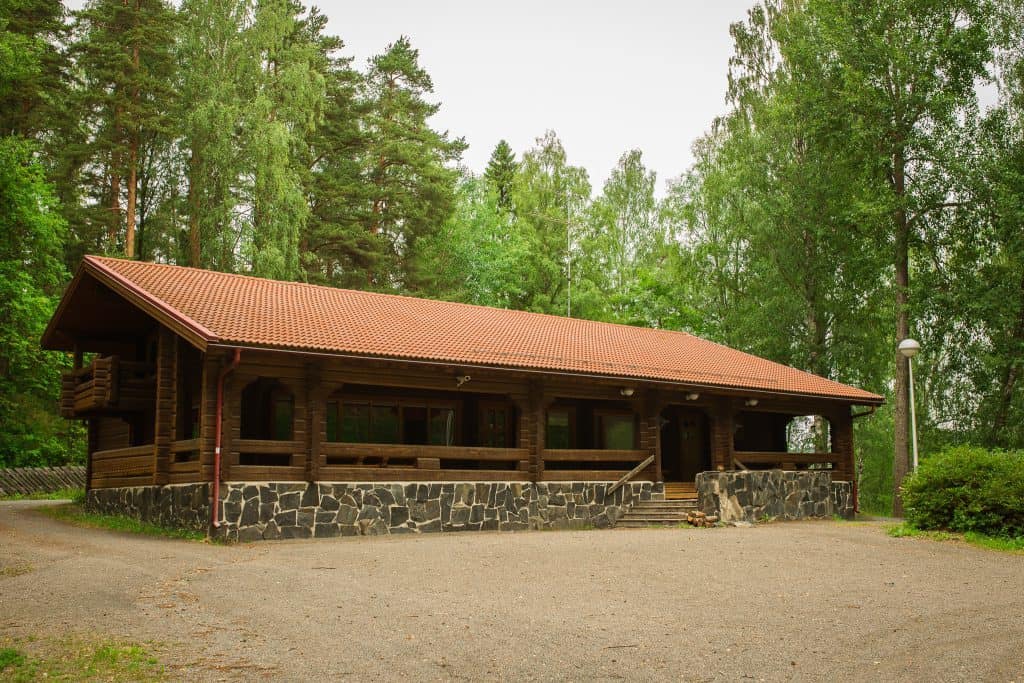 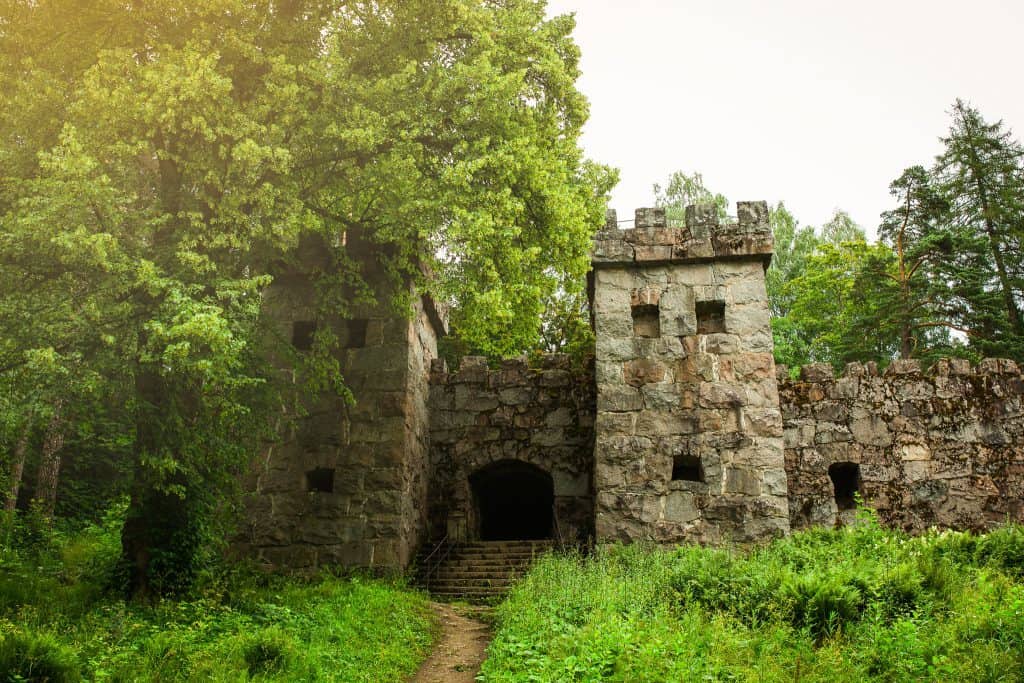 Rauniolinna (Ruin Castle), the granite castle located next to Aulanko Hotel, was made of grey granite in 1887. The castle has three towers. The highest tower can be reached by stairs on the inside. The other towers have stairs on the outside. When Hugo organised festivities in his manor, flags flew at full-mast in the towers of the granite castle. Since 1995, a children’s theatre has been operating in the castle. 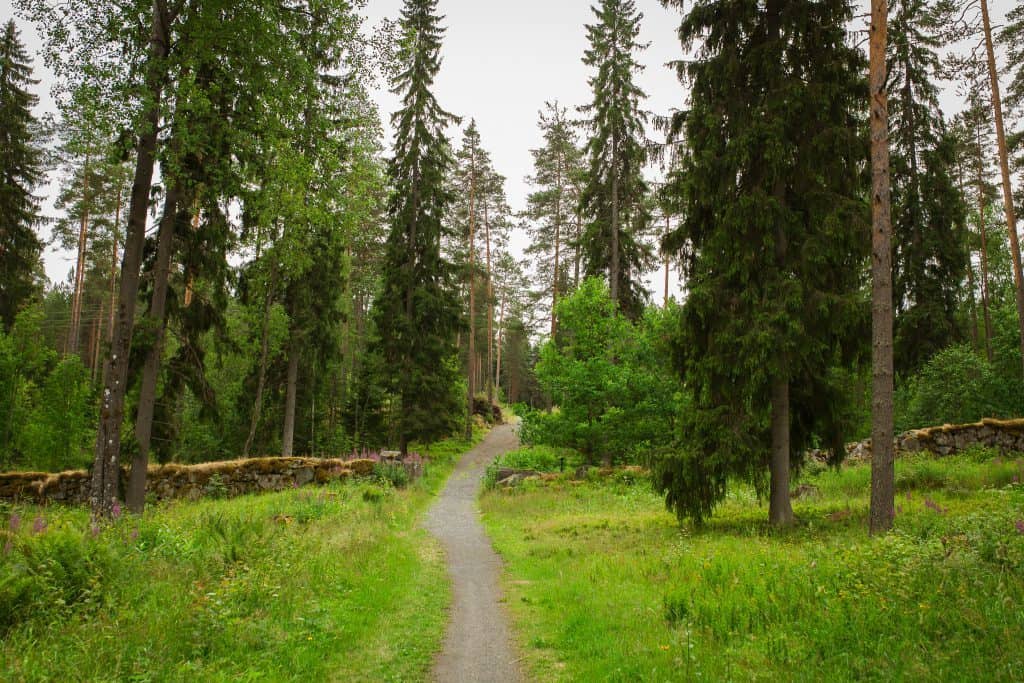 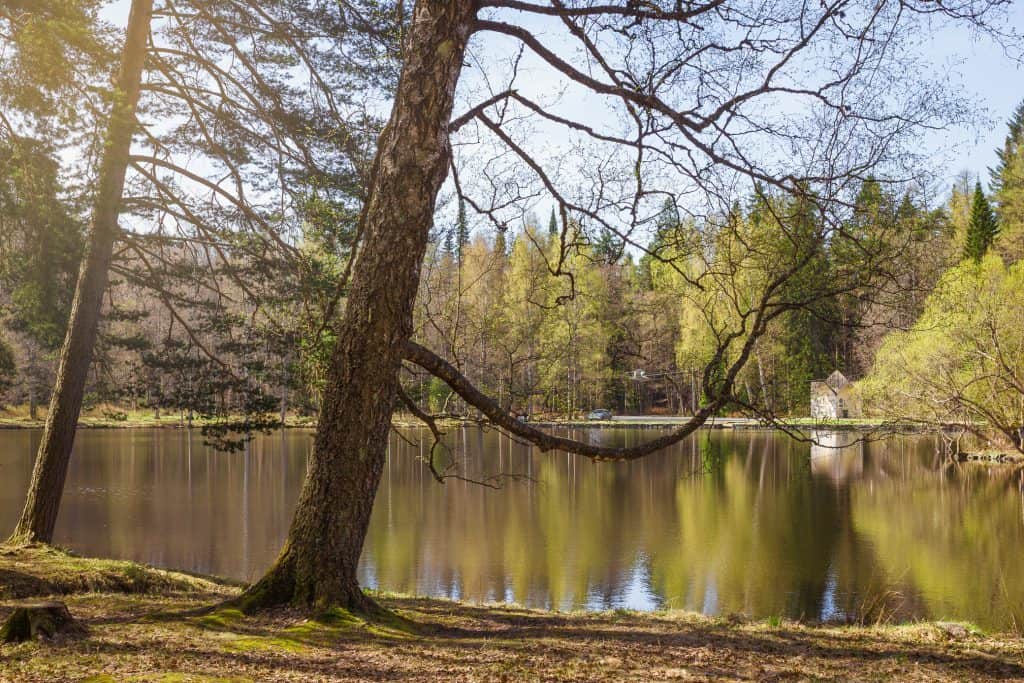 In 1885, Hugo had Lake Joutsenlampi constructed from a mire. An artificial island built for swans is located in the middle of the artificial lake. A mute swan (Cygnus olor) couple Janne and Aino lived by the lake, named after the famous composer Sibelius and his wife. In the summer, 2015 Janne was involved in a territorial fight with swooper swans (Cygnus cygnus). After becoming seriously injured, Janne needed medical treatment. For the rest of the summer, Aino floated alone in Lake Joutsenlampi (Swan Pond). In autumn 2015, Janne had to be put down. Swans cannot live alone, and as a result, Aino never returned to Aulanko from her winter dwelling. Today, there are hardly any swans in the pond, but plenty of other bird species instead.


An accessible path surrounded by various tree and shrub species goes around the pond. In addition, there is a kiosk on the southern side of the pond, selling ice cream in the summer. 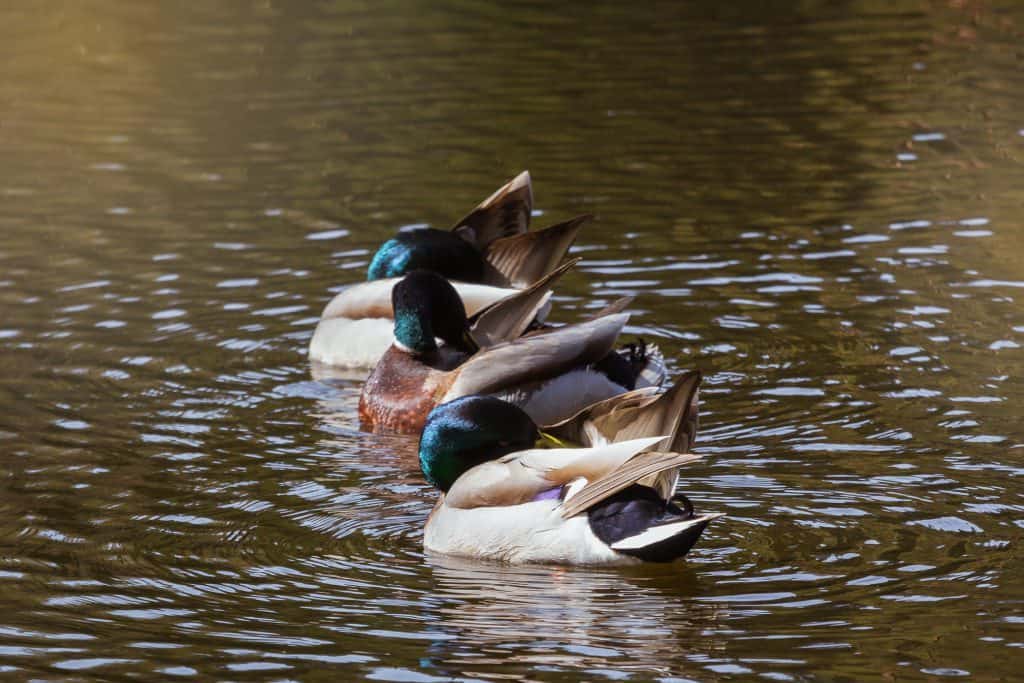 Lake Metsälampi was built at the end of 1880s to replace the Linnansuo Mire. White willow (Salix alba) was planted and the shoreline was covered in stones, following the example of Lake Joutsenlampi (Swan Pond), which was constructed a while earlier. The Gothic style Rose Valley Pavilion was built on the northern side of the lake. Roses were planted around the Rose Valley Pavilion, but they did not thrive. 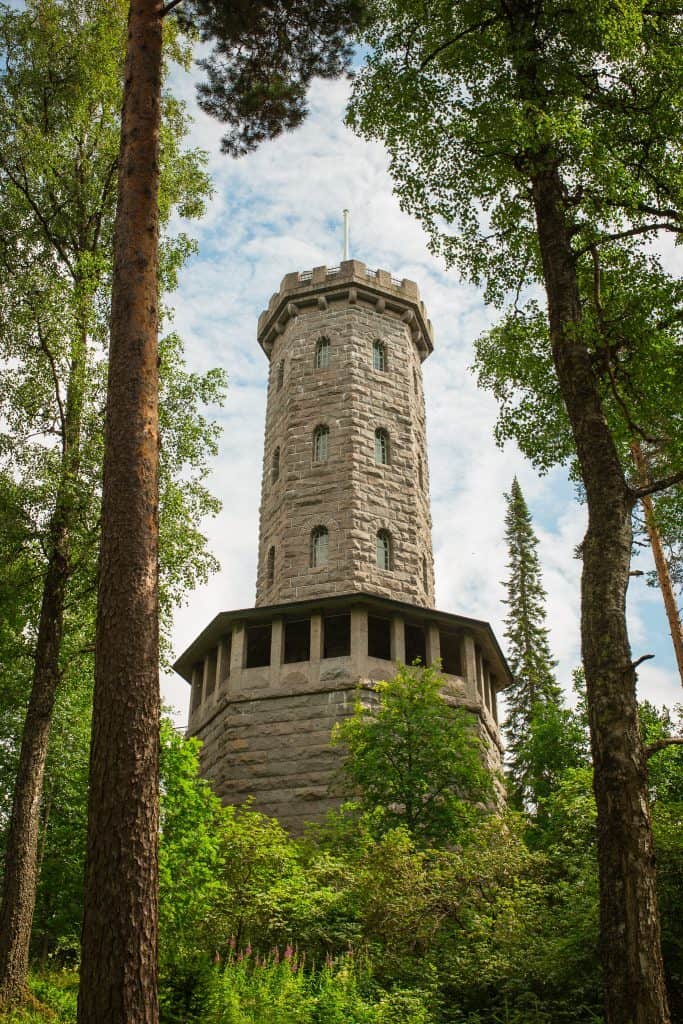 Hugo’s last construction project in Aulanko was the granite lookout tower built on the top of Linnavuori (Castle Mountain). The lookout tower was built by 300 workmen with their horses. The viewpoint is 33 m high and was completed in 1907. A long staircase leads to the top of the tower, but the view is well worth the climb.


Next to the tower, 322 stone steps descend down to Karhuluola (Bear Cave) located by the shore of Lake Aulangonjärvi.


During the summer, the lookout tower is open daily from 8 to 19, free of charge.
More info: www.aulangontornikahvila.fi 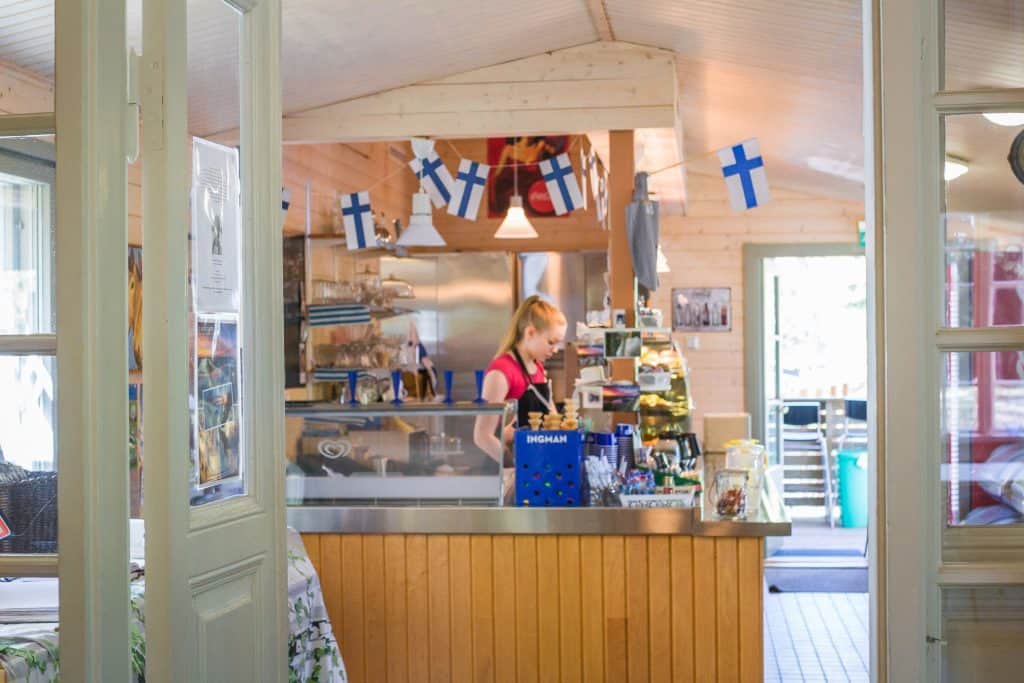 Aulanko’s summer café functions in the forest warden’s former residence, which was built at the end of the 19th century. The café has been restored and extended in collaboration with, for instance, the Finnish Heritage Agency, which has helped to select the wallpapers. The old wooden floors and the verandah with lace-like woodwork were renovated, and paintings illustrating life in Aulanko during Hugo’s times found their places on the walls.

Stone stairs from the lookout tower to the cave 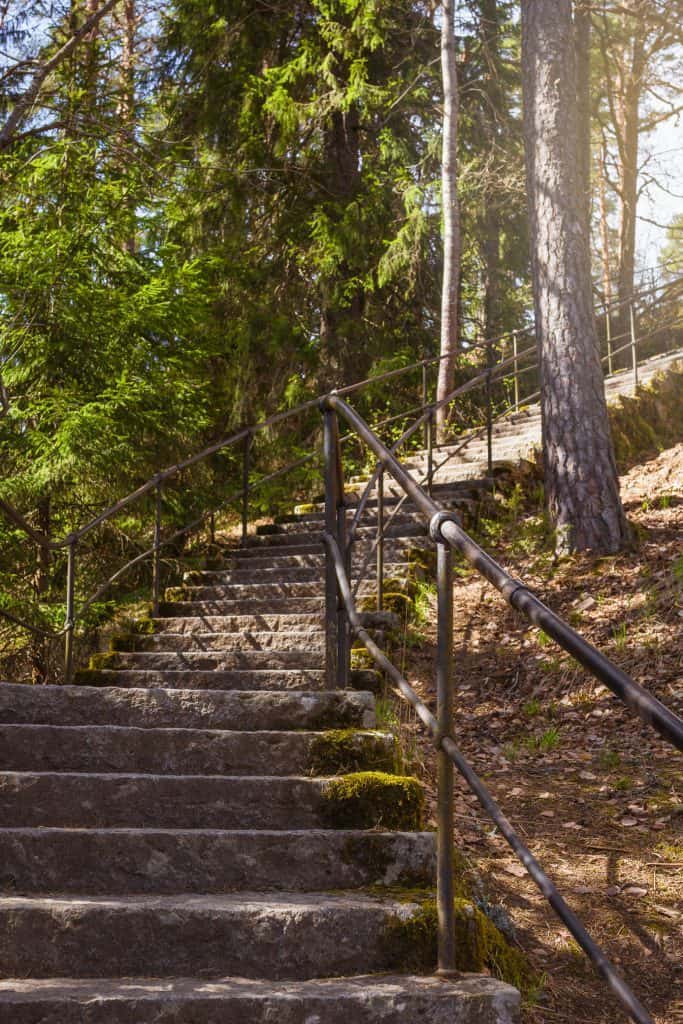 The granite stairs were completed in 1907, simultaneously with the tower. The stairs were built on a steep slope and they lead to Karhuluola (Bear Cave). There are 322 steps in the staircase. Along the way, there are small resting decks with stone benches and tables. The elevation loss is approximately 80 metres. 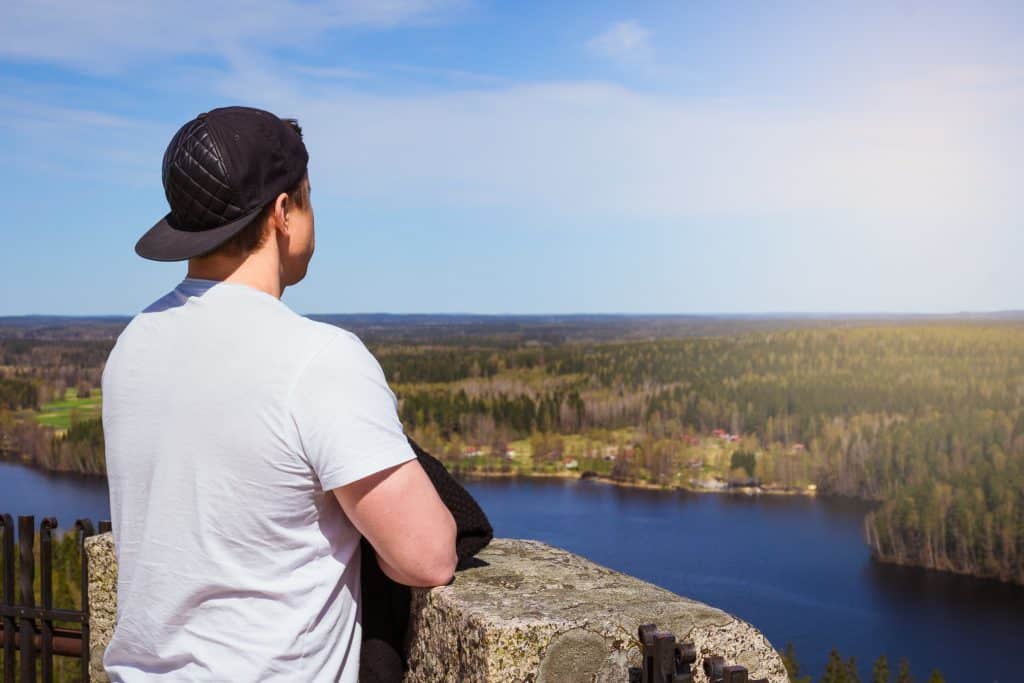 On the Aulangonvuori Hill, at the root of the lookout tower, there is a viewing terrace made of concrete, and consisting of two floors. A view over Lake Aulangonjärvi opens from the terrace. Previously, there was a decorative wooden pavilion in the same location. The viewing platform was built in the same place in 1934. On the lower deck of the platform, there is a wall painting depicting hunting, painted by the artist Lennart Segerstråle. 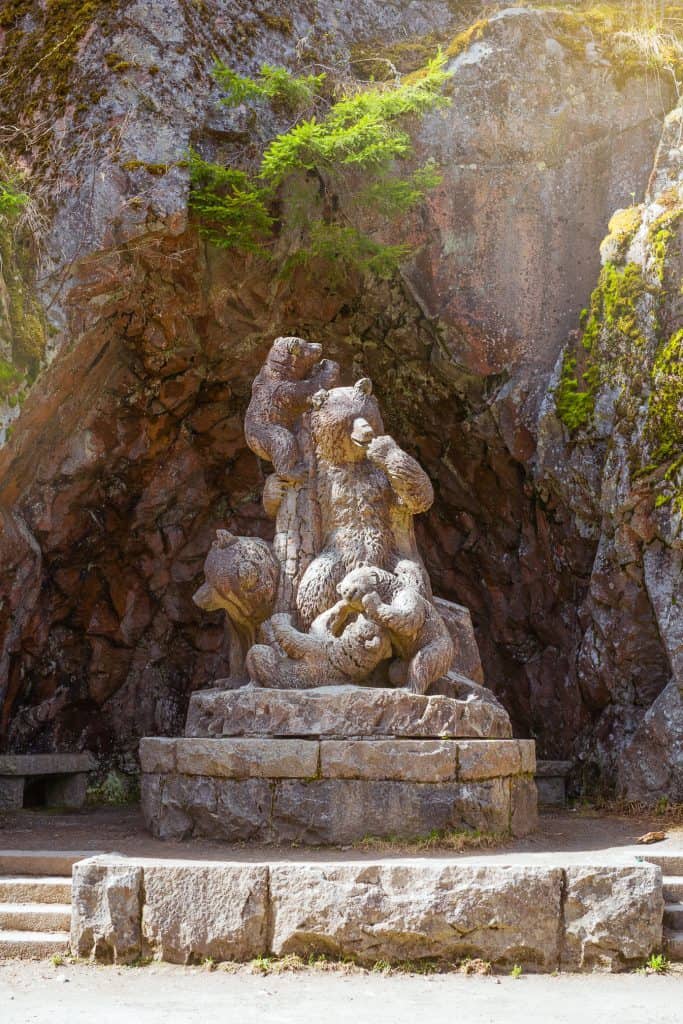 At the beginning of the 20th century, Hugo commissioned a cave and ordered a three-metre Karhuperhe (Bear Family) sculpture made from Estonian soapstone. Robert Stigell made the sculpture in his Lapinlahti studio in Helsinki, and it was then transported to the root of Aulangonvuori Hill. The story goes that the artist used a stuffed bear and a living bear cub borrowed from Helsinki Zoo in Korkeasaari as models. 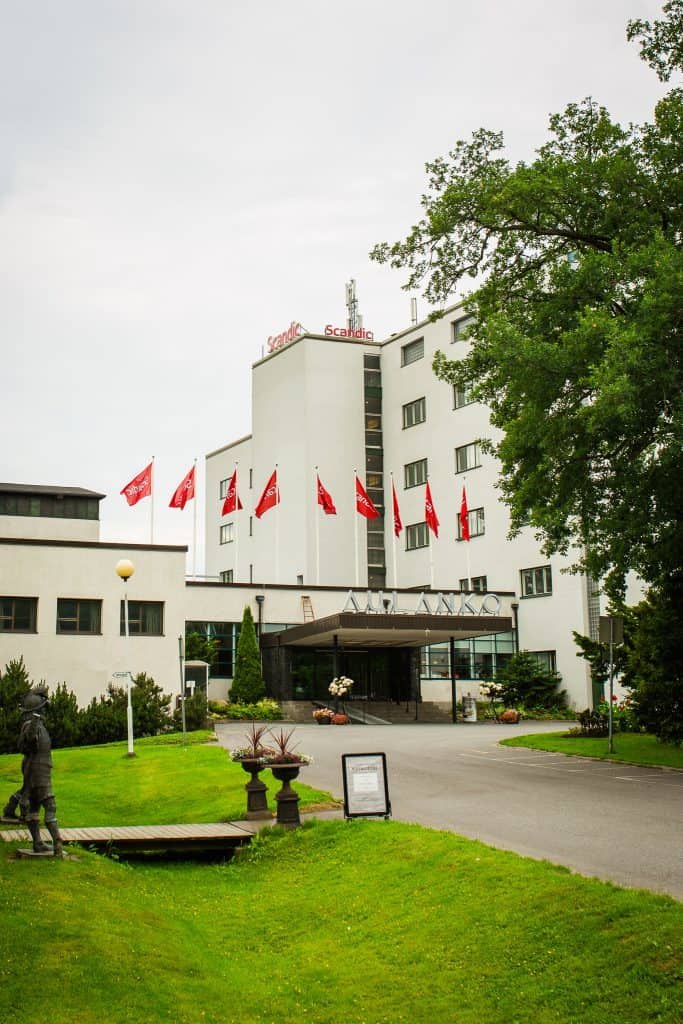 In1883, Hugo acquired the Karlberg Manor and its estate located by Lake Vanajavesi. As Hugo become older, he sold the estate to the City of Hämeenlinna for a third of its value, 7 million Finnish mark. The trade took place on the condition that the area would be kept open for all people.


In the extremely cold temperatures of January 1928, people noticed flames in the direction of Karlberg Manor. The beautiful manor was in flames and burnt down completely. However, the wooden Kavaljeeri (Cavalier) guest house survived the fire, and it currently functions as Aulanko Hotel’s summer café.


After the fire, a new building was constructed, and it operated as a hotel and a restaurant for almost ten years before it was transported to Hattula. After this, a new luxury hotel was built in the same place, of unique quality and style even internationally speaking.


During the war 1939–1940, the hotel functioned as a war hospital, and, starting from autumn 1941, it was a holiday destination for German soldiers.


Over the years, the hotel has been extended several times. The most significant extension in recent history is the spa, completed at the beginning of the 21st century. 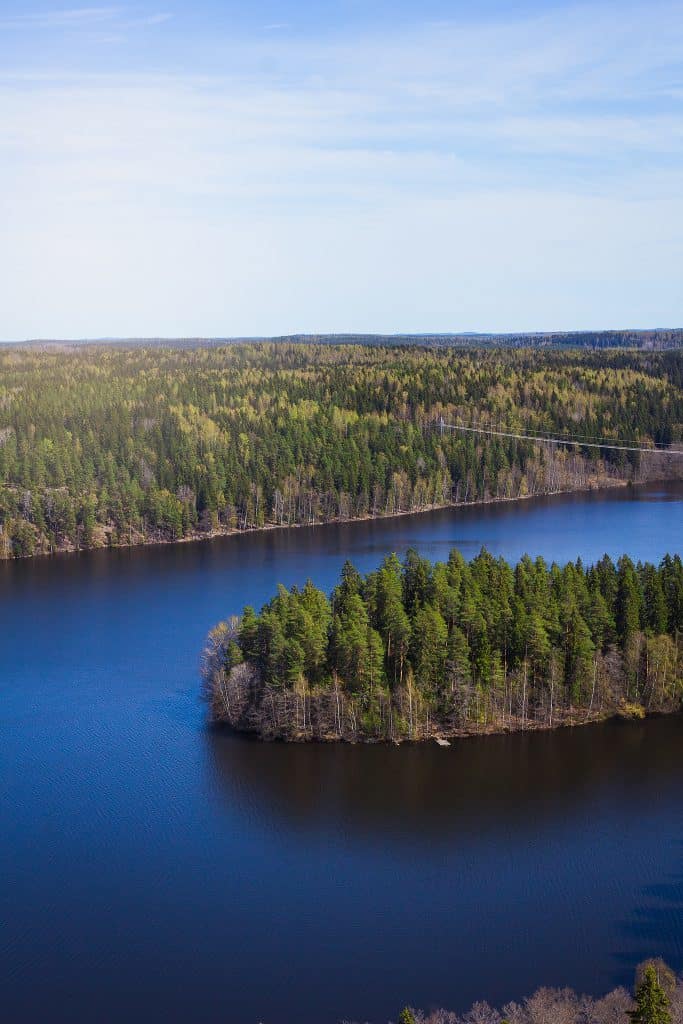 One of Aulangonniemi’s famous and most photographed landmarks is Lusikkaniemi (Spoon Cape). The cape is shaped like a spoon, which has inspired the name. In the past, the cape used to be called Hiidenniemi (Devil’s Cape) because a prehistoric sacrificial site was located there. 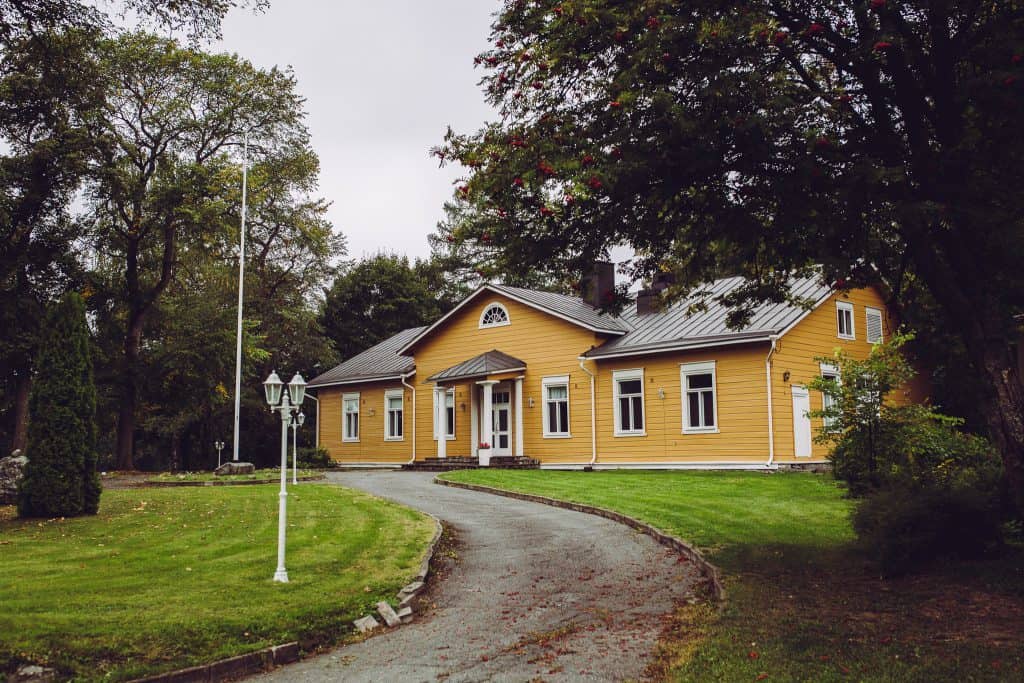 Built at the beginning of the 19th century, Katajisto Manor served as the main building of a ratsutila, an estate that supported a horseman with his horse and equipment in exchange for tax exemptions. In Hugo’s days, his guests stayed in the building. In the winter 1949, the second floor of the building was destroyed in a fire and never reconstructed. The reason was the 1952 Olympic Games, as the building was urgently repaired in order to provide accommodation for the Olympic pentathletes. 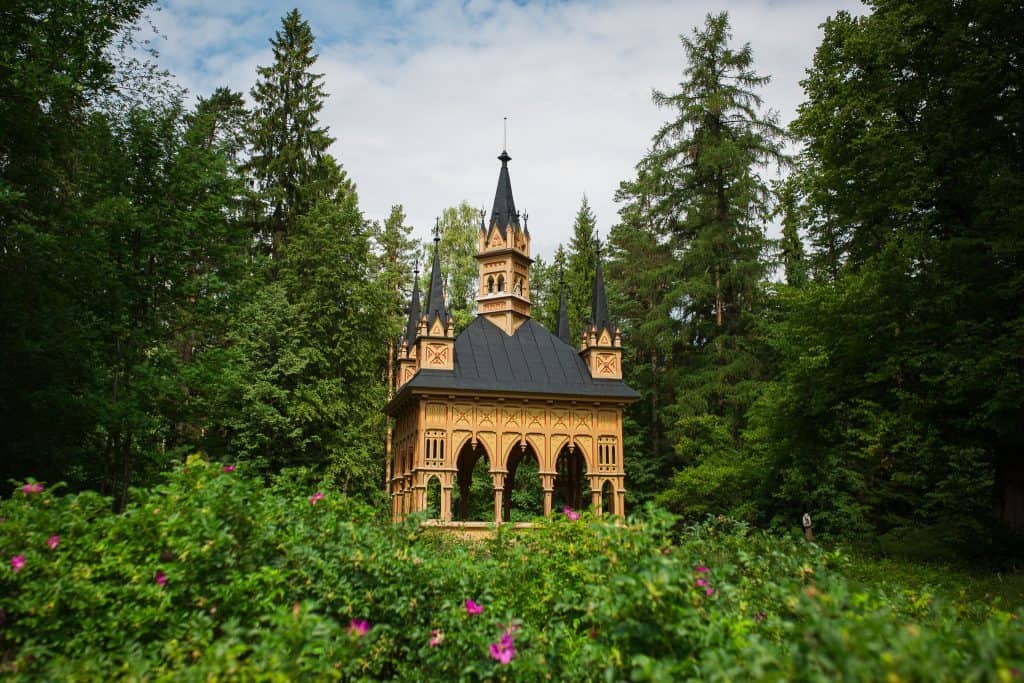 The Gothic pavilion built by Hugo on the northern shore of Lake Metsälampi was originally surrounded by gorgeous roses, but they did not thrive and disappeared quickly. The pavilion was named after the roses. There was a jetty in front of the pavilion, and visitors could go rowing in the pond. 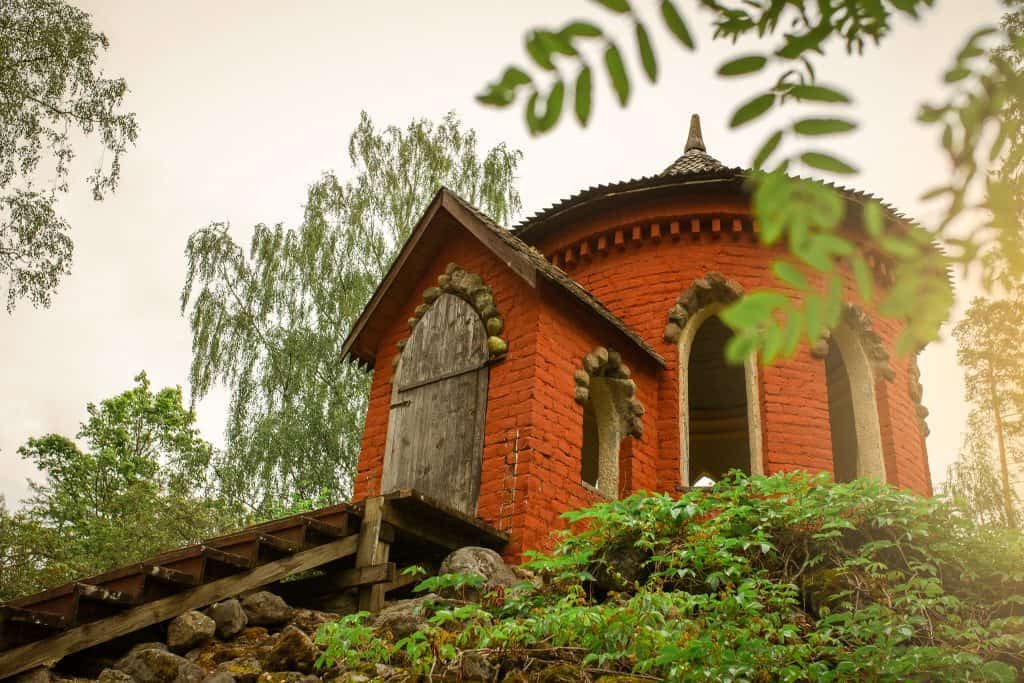 A small red-painted brick pavilion located on a high stone hill is named Onnentemppeli (Temple of luck). The exact date of its construction is not known, but it is thought that the pavilion dates back to the 1880s, when the park was built. In the past, there were glass paintings in the windows of the temple. In Hugo’s days, domestic staff had summer parties by the temple.


The story goes that Hugo commissioned Onnentemppeli as a gesture of love to a Polish princess he was going to propose to. It is also said that Hugo hid a coin among the stones, and the one who would find it, would become the owner of Aulanko. Eino Leino’s “Kell onni on” poem is said to have been inspired by this story. 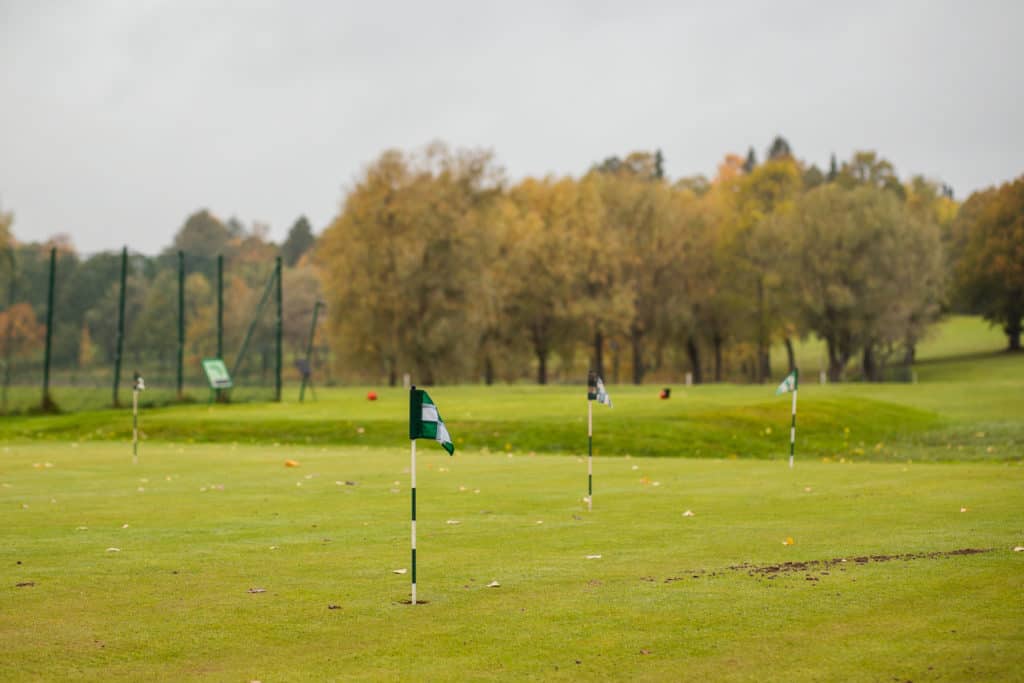 The Aulanko golf course was built on a plot of land that served as a potato field during the war. The golf course was first introduced in 1940, immediately after the Winter War, which makes it one of Finland’s oldest golf courses. The field was originally a 9-hole golfing area, which was extended to an 18-hole golf course in the early 21st century.