The scenic village of Mallankainen is located at the seam point of the clay expanse of the Vanajavesi valley and the East Janakkala uplands. The landscape image is created by large, flat arable lands in the south and west of the village, and high ridges, cliffs and hills in the centre of the village, among which Ilovaara, Kakarinkallio, Käärmemäki, Mäyrälnamminkallio and Lavankallio are worth climbing for fine scenery. The northern and eastern part of the village lie numerous clear forests, small ponds and lakes, much of which are still unbuilt and some protected by formula from construction. Sammaljärvi, Paha Valkea, Saukonlammi, Haukilammi and many others are found on the map.

The Mallinkainen village has had inhabitants since at least the turn of the 18th and 19th centuries. The west Janakkala and Turenki estates had — and partly still have – extensive land holdings in the village. In the early 20th century, there were many crofters. At least one mill operated in Sammaloja in the 19th century and at the end of the 19th century lands of Alimaa were turned into fields. In the very early years of the 20th century, the folk school was established in Mallinkainen, serving as a school until 1974 and since then as a centre of village activity. The beautiful log village school is now owned by the Mallinkainen Village Association. The association was founded in the early 1990s and has diverse, lively activities at the school. On summer Thursdays, the village school opens its doors as a Motorist Café.

There have been two shops in the village in time. For today’s services, in the best condition is Mallinkaistentie from Turenki to Löyttymäki, which has been repaired and paved. It is good to pedal along it or drive by car to Mallinkainen. The village has about 50 inhabited houses and has a population of about 150.

The fauna of the area is abundant. Observations of bears are made every year and in one year the bear had a winter nest on the back slope of Löyttylampi pond. The lynx population is intense, elk and deer can often be seen and in early spring an eagle owl can be heard hooting. Alimaa has become a resting place for thousands of geese and swans in spring and autumn, where large flocks land for weeks. 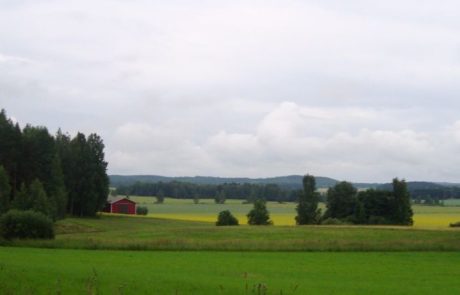