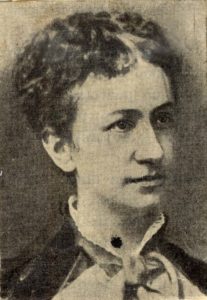 Fredrika Wetterhoff was born to a wealthy legal official Georg Adolf Wetterhoff and his wife Sofia in Helsinki january 14th 1844. They moved to the Inkala manor in Hattula when Fredrika was a child. She received an education typical of the daughters of the upper-class families of her time: the education included foreign languages and handicrafts. She also learned Finnish, the language of the common people, and in her room she held a small school for the children of the tenants of the manor. She also worked actively for founding a primary school in Hattula.

In 1872, the family moved into Hämeenlinna. After one year, Fredrika Wetterhoff left for Paris and Leipzig to study drawing and French. After her return to Hämeenlinna, Wetterhoff worked as a teacher in the Hämeenlinna lyceum and as a director and teacher in the Finnish-language girls’ school founded in 1878. After this, she again left Finland to study abroad. This time she studied drawing, sculpting and design theory in Stockholm. At that time, she became familiar with the feminist ideas and the cultural interests of the working class which inspired her to find ways to improve the lives of ordinary women by providing them with education.

The establishment of a craft school for women in Hämeenlinna

In 1885, Fredrika Wetterhoff started to provide education in crafts and arts for women in Hämeenlinna. The school of handicraft and domestic arts she had founded rented a house by Lake Vanajavesi in 1890. Three years later, Wetterhoff bought the house in order to have a permanent place for the school. The students studied various kinds of handicrafts, including needlework such as sewing linens, knitting and crocheting and later also weaving. A teacher-training programme was started in 1890, because in the entire country there was a great need for the teachers in the field.

The school operated upon the principle that the students who came from wealthy families paid for their tuition, but for others it was free. The school strove to treat all its students equally: ordinary and upper-class girls were treated as equals. The school followed international trends and participated in exhibitions abroad. Teachers also came to the school from abroad, for example Carl Neu from Germany.

The school received small grants from the town of Hämeenlinna and it also received government assistance. The school also earned part of its own income by selling handicrafts and taking commissions. One example of such commissions is the order made by the Häme battalion: the order included 300 pillowcases, 40 mattress covers and 520 gymnastic shirts.

Fredrika Wetterhoff was known as an impatient person who spoke her mind. As a teacher, she was sometimes criticised for the strict pace she demanded from her students. The local newspaper, Hämeen Sanomat, published suspicions that rather than a school, the educational establishment was in fact a factory. This news, however, was refuted by the county governor. Studying in Wetterhoff’s school was not only work, but also included pleasant gatherings such as picknicks and evening get-togethers.

Fredrika Wetterhoff led her school in Hämeenlinna until her death. 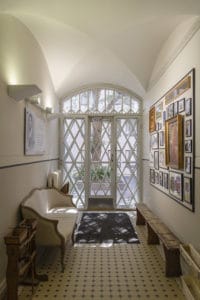 In the Wetterhoff House in Hämeenlinna, you can explore the historic surroundings.

The Wetterhoff House and heritage today

Now the school founded by Wetterhoff is part of Häme University of Applied Sciences, and the traditions started by her are maintained by the Fredrika Wetterhoff Foundation. In the Wetterhoff House in the center of Hämeenlinna, you can explore the historic surroundings and shop at the traditional craft shop. There are workshops for groups, you can make your own rya for example. In Wetterhoff House there are several firms and shops dealing with craftsmanship and Wetterhoff hosts various events. Welcome to Hämeenlinna to explore Fredrika’s heritage. 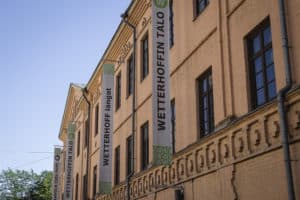 The Wetterhoff House in the center of Hämeenlinna has a lot to see and do.

You can buy lovely colorful yarns and much more at the Wetterhoff House craft shop. 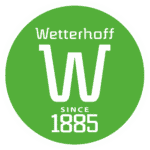 References: An article by Aura Korppi-Tuomola at: www.kansallisbiografia.fi and the archives of the Fredrika Wetterhoff Foundation, Hämeenlinna.