This year, exactly on Wednesday the 24th of November, it will be 140 years since the first glasses were blown at the Iittala glass factory.

A long journey has been made since the Swedish master glassblower Peter Magnus Abrahamson, on a frosty winter day in February 1880, stopped his sleigh ride on the shores of Lake Äimäjärvi, stating resolutely in his mind “This is the place where a new glass factory will rise!”.

In the early decades, Iittala had glassblowers from Sweden, Germany and Denmark. It was also common for the glassblowers to move from one factory to another.

The profession of glassmaker has often been inherited in families and many families in Iittala also have a long history in the glass factory. One example is Heikki Punkari, one of the best glassblowers in the country, who retired in June 2020. He worked almost fifty years at the glass factory. He began his career at the age of 15 in a summer job by mowing the lawn in the factory yard. The father of the master glassblower, Kosti Punkari, was once one of the factory’s most respected glassblowers. Heikki Punkari’s grandmother also worked at the factory.

In addition to the Punkari family, there are long glassmaking traditions at least in the Löflund, Purtela, Välimaa, Jokinen and Teileri families in Iittala. In many families, professionals have worked in several different factories. For example, Erik Löflund, the father of Artturi Löflund who worked in many factories and later retired from Iittala as a cabin master, worked as a blacksmith at the Riihimäki glass factory, among other places. Also Artturi Löflund’s son, Reino “Reka” Löflund, went to work in the glass factory like many other boys in Iittala. He started working as a packer in the summer and started the following year as a mold boy. After finishing his school, Reino Löflund became a younger glassblower. After various assignments, he was elected chief cabin master in 1960. In this position, he continued until his retirement. 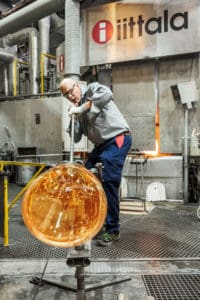 Today, Iittala factory is the only glass factory in Finland and the largest in the Nordic countries and is part of Fiskars Group. The factory is situated in Iittala Village, which is a great destination for a day trip and offers a lot to see and experience. In honor of the anniversary of the glass factory, the exhibition “Iconic works and makers of Finnish glass art”, curated by the Finnish Glass Museum, will open in May at the Design Museum Iittala.The anniversary year brings much more with it, including special products and a work of glass art rising in the center of Iittala Village.

Visit at the glass factory and Design Museum Iittala!